I believe the future is about healing. This conviction is neither passive nor patient. As an arts leader programming work for young audiences, I strive to live this value as intentionally as I am capable.

In a moment when hatred, bigotry, and white supremacy movements grow with disturbing velocity, the spaces of healing we forge are necessary. This malevolence is a seismic disruptor to our important spaces. In Theatre for Young Audiences, we have the opportunity to present a potent, alternative future.

This summer we produced Ragtime: School Edition as part of our Student Shows at Seattle Children’s Theatre. Ragtime is a powerful story about social upheaval and racial conflict in American history; a story that has profound relevance to current events. The play contains sensitive material, including profanity, sexual references and offensive racial slurs. The varied plot lines include adultery, murder, and racially motivated violence. Collectively, we knew the material would be upsetting to cast and audience alike. How could we create a safe space for healing? How could we project a bold and encouraging vision of the future through potentially disturbing work?

“The material given to us was so deep. But the opportunity to take on the show was truly an appreciated experience.” – Student Performer

(Throughout this article are quotes from the student performers. Their ideas expressed in their own words.) 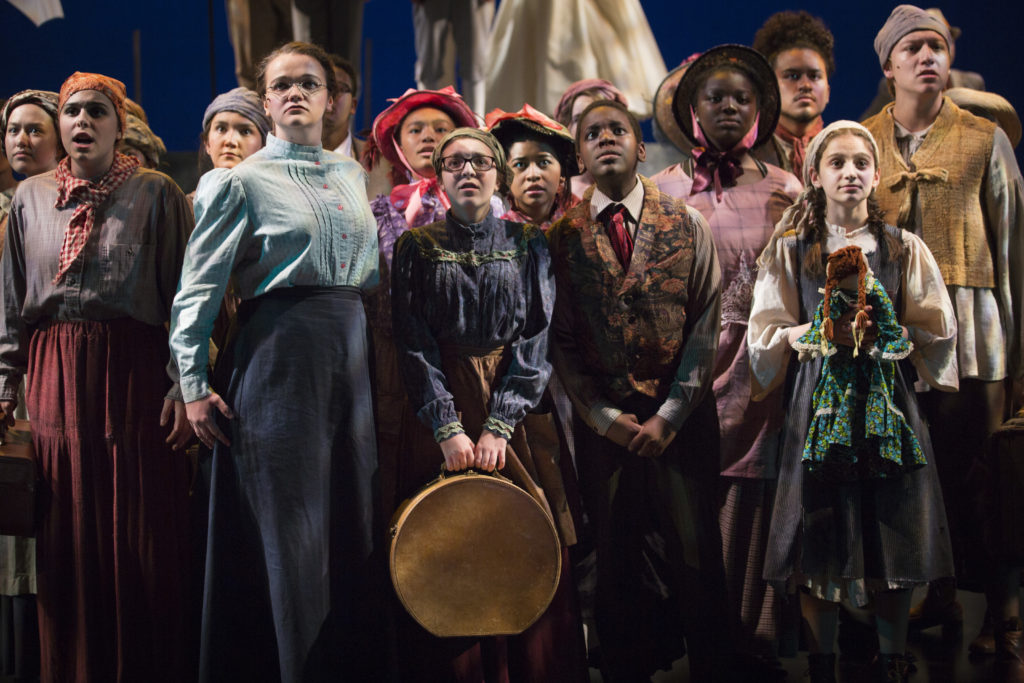 We built a community inquiry. In our first strategy, we directly addressed the families of the Ragtime cast prior to the beginning of rehearsal. Acknowledging the challenges of the content was a first step. Controversies, which had arisen during previous high school productions in other parts of the country, were openly shared. Strategies for engagement were drawn: Inviting community members in rehearsal, offering post-show discussions following each performance, alerting audiences of content nature via signage, email and written messaging. Most vitally, we needed and asked for feedback.

We hired teaching artists outside the process to operate as “tending choreographers.” As one of the teaching artists from HeArtWork Collective shared early in the process, “We hire fight choreographers to keep everyone safe, why would we not do the same for racially/ethnically charged language?” This question highlighted the vulnerabilities of our situation and led us to a better understanding of the risks. These artists interacted with the Ragtime cast at three touch points. Alongside the creative team and cast, they drafted community agreements in the first orientation session with students and families. During the second week of rehearsal, they facilitated discussion on the process and success of those agreements. Finally, in a post-show experience, the teaching artists led a Q & A session to discuss student process with the audience. Their contribution was invaluable. In several post-show surveys, students responded to the safe space and open dialogue on topics of race and ethnicity.

“As a white upper-middle-class girl growing up in Seattle, I’ve been taught a lot about equality and the unjust things that occur in our nation. I’ve never fully absorbed what this all means until Ragtime. I was uncomfortable and it took me a few days of rehearsal to figure out why–if the plot of Ragtime occurred in present day and not 1906, it would still be the exact same and no one would bat an eye. I’ll never forget the things this show has taught me.” – Student Performer

We invited experts from the community to join us. Dee Simon, Executive Director for the Holocaust Center for Humanity, and Anthony Shoecraft, Special Advisor to the Mayor on Black Male Achievement, hosted a discussion with the cast on the second day of rehearsal. Dee and Anthony spoke personally, passionately, and intelligently about dedicating their lives to social justice. Both honored the students’ collective wisdom and vulnerability. I witnessed an extraordinary moment of community as the guests seamlessly passed the conversation to the students who had grasped the depth and force of the subject. By respecting the many identities and histories in the room, a profound sense of belonging emerged. This is when we are at our best. When we draw from and interweave individual identities to create a more expansive place.

"By respecting the many identities and histories in the room, a profound sense of belonging emerged. This is when we are at our best. When we draw from and interweave individual identities to create a more expansive place."

“This experience showed me that I’m not alone, because no matter what I was going through I felt understood. Because the Ragtime cast has become my family, and I am truly not the same person I was five weeks ago. This experience taught me to be a better version of myself.” – Student Performer

The weekend of performances coincided with the violent events in Charlottesville on August 13, 2017. I was riveted by the rage, hope and depth embodied by the young actors that evening. Their performance and understanding of the content moved me like an earthquake. Their desire to overcome hate and bigotry radiated from each moment. They proved themselves to be young people ready to speak out. 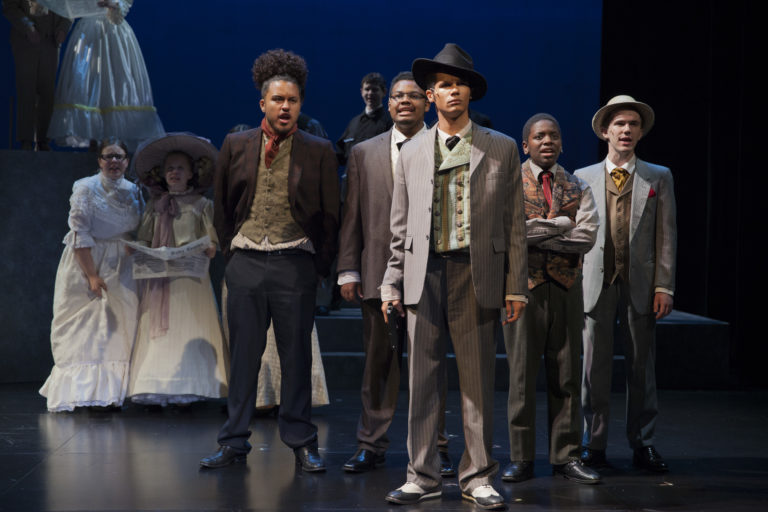 “This has been such an eye-opening experience to what people of color have to go through on a daily basis and how I can stand up to social injustice even if it’s scary. And I’ve learned that this show is so important in today’s world because it forces people to wake up and deal with the uncomfortable. Too many people choose to block out the things that need to be dealt with.”  – Student Performer

Monday morning, after weekend performances, our entire staff was ignited by what the Ragtime cast created. Helping those students collectively confront these issues at an age when they can recognize the scope of the challenge and have the heart to say they can be the generation to create a better world is the gift of this production. Our work onstage can be powerful. Getting our work to the stage needs to match that power. That’s where healing starts.