Why are journalists like Joanne Lu writing articles about Black Panther for NPR or Casey Haughin exploring why “Museums need to talk about Black Panther” in The Hopkins Exhibitionist, a journal launched by students at John Hopkins University? Simple. Because people of color.

“Every burden, every disadvantage/ I’ve learned to manage, I don’t have a gun to brandish/ I walk these streets famished.”(Miranda) See what I did there? That’s right, diverse audiences are hungry for diverse stories with diverse performers, created by diverse people. Hamilton didn’t rise to fame just because everyone was interested in finding out more about our founding fathers.

”It’s a theatrical rarity: a critically acclaimed work, written by a young composer, that’s making a cultural impact far beyond Broadway’s 40 theaters. That it’s told through the language and rhythms of hip-hop and R&B — genres that remain mostly foreign to the musical theater tradition — has put it in contention to redefine what an American musical can look and sound like.” (Erik Piepenburg, E. (2016). Why Hamilton ‘Has’ Heat) 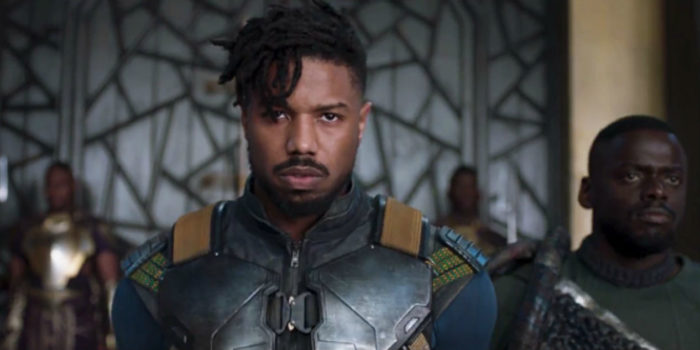 Micheal B. Jordan as Erik Killmonger in BLACK PANTHER

“Hey, Auntie!” Killmonger insidiously proclaimed after proving his relation and rightful station in Wakanda. To some, this may have been a catchy comical phrase suggesting, “ha, I am part of the family.” But in African American culture those two words add decades of context dating back to a time in which families were intentionally torn apart and black folks were seen as property and not people. If you were an orphan as Killmonger was then you were readily and necessarily raised by your Grandmother or your Aunt(ie). The thought of leaving that child behind or being given up to a system that was generally against black people was unthinkable and almost never done. One of the various interpretations that could be gathered from this is, I’m your blood and you have to accept me, especially considering your honor and high regard that you hold yourself to. He was not wrong – this honor code necessitated that they allow him in even though they knew only something negative would follow. Possibly as an African American, you understand the layers that were present in those two words right away, and maybe you didn’t. But what theatre artists, practitioners, and scholars must acknowledge and adapt to is the fact that these layers are exactly what your audiences need and are looking for. This is the reason black audiences fill theatres, auditoriums, and found spaces to support unknown titles by practitioners who have little background in theatre but rarely step foot in theatres steeped in history smack dab in the middle of your city. Too often the “can do artsy attitudes” become “can’t never” statements rather quickly when the seemingly daunting task of openly including stories dependent on the presence of black and brown people’s involvement arise.

"This is the reason black audiences fill theatres, auditoriums, and found spaces to support unknown titles by practitioners who have little background in theatre but rarely step foot in theatres steeped in history smack dab in the middle of your city."

“‘Can’t never’ is a double negative. Though at the moment, those two words just might be our best expression of truth.” As I sat in rehearsal tonight for The Grand Rapids Civic Theatre’s production of Cheryl L. West’s Akeelah and the Bee​, the smooth resonate deep voice of a fellow actor speaking this line as Dr. Larabee resonated in me as this article sat in my google docs only half written. “Can’t never”, “axe” instead of “ask”, “word!”, “oh, word?”, and “word” are all expressions of our truth with meaning and substance and they continue to prove just as richly entertaining as all other speech if not more. The inclusion of this content is just as important to the world of contemporary theatre as proper English and the American dream. The context of these stories should be crafted, or at least shaped (that’s right, I’m pushing you to create opportunities for Dramaturgs of color too) by the people who have lived it. Not being a minority doesn’t mean that you can’t never create those characters, it means that as an artist your goal of bringing life to honest stories should outweigh living in the artistic comfort zone allotted to you by consistently writing, directing, producing, or acting as a dramaturg on a project that is seen as traditional or in other words, white male contrived.

"If you want to keep theatre alive, living, breathing, diverse, rich, and making money then you have to adapt with the times. Young people are smarter than they’ve ever been, aware of the diversity around them and the lack thereof."

If you want to keep theatre alive, living, breathing, diverse, rich, and making money then you have to adapt with the times. Young people are smarter than they’ve ever been, aware of the diversity around them and the lack thereof. In the first batch of play attendance assignments turned into me, a student scribbled in the notes “there were no black people” as one of her observations to a production of William Shakespeare’s The Tempest​. They notice. Your audience notices when not one black or brown being is on your stage. This impacts who shows up or your auditions, shows, and who fills the seats. Stop trying to convince us that there aren’t amazing artists of every shape, size, color, and ability out there. Maybe you just aint never working hard enough to include them. Stop sleepin’ on nem, don’t allow honest and amazing stories go untold because inclusivity is intimidating. Join the conversation.