How do you create theatre for an audience that experiences the world beyond sight? And can that same theatrical experience create an environment in which all audiences can explore the world primarily through touch, sound, smell, and taste?

Artistic Director Jacqui Russell and her team at Chicago Children’s Theatre are boldly tackling these questions through the creation of a new work, X Marks the Spot, premiering January 22. The intimate and interactive production, loosely based on the Victorian children’s novel “Five Children & It” by E. Nesbit, features a low-light setting, touchable and scented props, and audiences seated at interactive tables.

While this may seem like a very niche project for a children’s theatre that serves a wide range of audience members,  X Marks the Spot continues a visionary dedication demonstrated by Russell and her theatre to serving all audiences in deep and meaningful ways. For over a decade, CCT has created productions specifically for audiences on the autism spectrum through its Red Kite initiative, even building this model into the design of their new home. In 2017, their production of Pinocchio (a collaboration with Neverbird Project’s Co-Artistic Director Levi Holloway) featured a cast of hearing and deaf actors on stage. So, when CCT began offering touch tours to blind and visually impaired audiences in 2015, the spark of a new frontier in theatrical experimentation was ignited.

“It was one of my favorite days at the theatre,” Russell shared about her experience of the touch tours for blind and visually impaired audiences created around CCT’s production of Wonderland: Alice’s Rock and Roll Adventure. One moment of discovery occurred following a performance when the actors came out to meet the audience. The actor who played Alice had long blonde hair, and when she leaned over, one of the young audience members touched her hair. In that moment, it became clear that all the kids wanted to touch her hair. They wanted that tactile connection with the character of Alice who they got to know through sound over the course of the play. “Everyone in the theater was crying. It was just so gentle and beautiful.” During this talkback, one young person shared, “Thank you for putting us in the front row. A lot of times we go to the theater and they put us in the balcony. They don’t realize we can feel the show when we’re in the front row.” This was a turning point for Jacqui’s understanding of this work. She wanted to integrate what she was learning from the touch tours and build it into a theatrical experience created from those ingredients. “They brought so much curiosity and enthusiasm for the art form. I thought, I just have to do something for this audience. I’m so inspired by them. They are experiencing theater on this whole other level.”

“They brought so much curiosity and enthusiasm for the art form. I thought, I just have to do something for this audience. I’m so inspired by them. They are experiencing theater on this whole other level.”

An opportunity arose when CCT discovered that there was a school with two blind/low-vision classrooms just 10 minutes away from its new home in Chicago’s West Loop. Russell started teaching drama classes in these classrooms, to learn with and from the students ages five to fourteen. Over the course of this residency, CCT learned a great deal both from the young people and from the faculty at the school. Bolstered by an NEA Grant that provided the opportunity for a deeper development process, CCT began work on the new production.

Touch Tour and Audio Description as part of the show experience. X Marks the Spot utilizes elements of touch tours and uses them as the framework for the theatrical experience. Props are touched and manipulated by the audience before each scene in which those props play a prominent role. A Facilitator (or “Adventure Guide”) who is part of the cast works with each section of the audience in smaller pods to deliver moments of text directly and ensure the interaction between audience member and object. 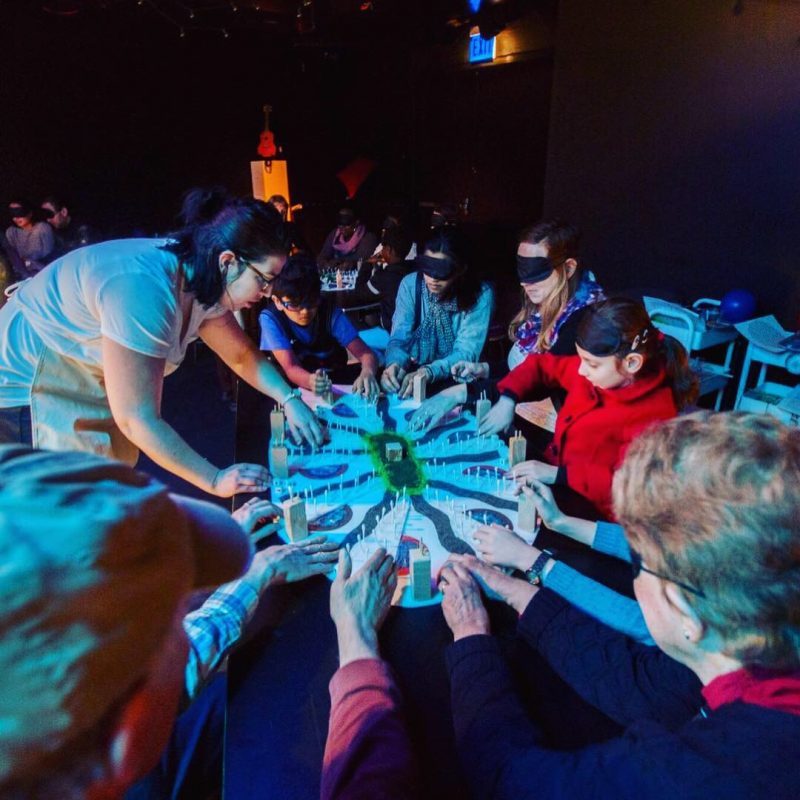 Re-imagining typical design strategies. Designers were part of the development process from day one, offering ideas for the structure and shape of the piece as part of the dramaturgical creation process. The concept that emerged was a playing space shaped as a big circle with a central “donut-shaped circle of light.” Tables surround the big central circle. Everyone is facing into the tables but the performers are all in the center, with no two audience members facing the exact same direction. At the table there is a Facilitator at the table who talks directly to the audience and guides them through the sensory moments. Jacqui felt strongly about “creating a performance space in which everything can be touched.”

Collaborating with the target audience. At every step of the creative process, young people who are blind or visually impaired were part of the development. They would watch work-in-progress, provide feedback, and explain what the experience was like from their perspective. These notes would directly influence the next stage of development. Key teachers at the school were also integral in the development process, with one even joining the development team as a consultant. 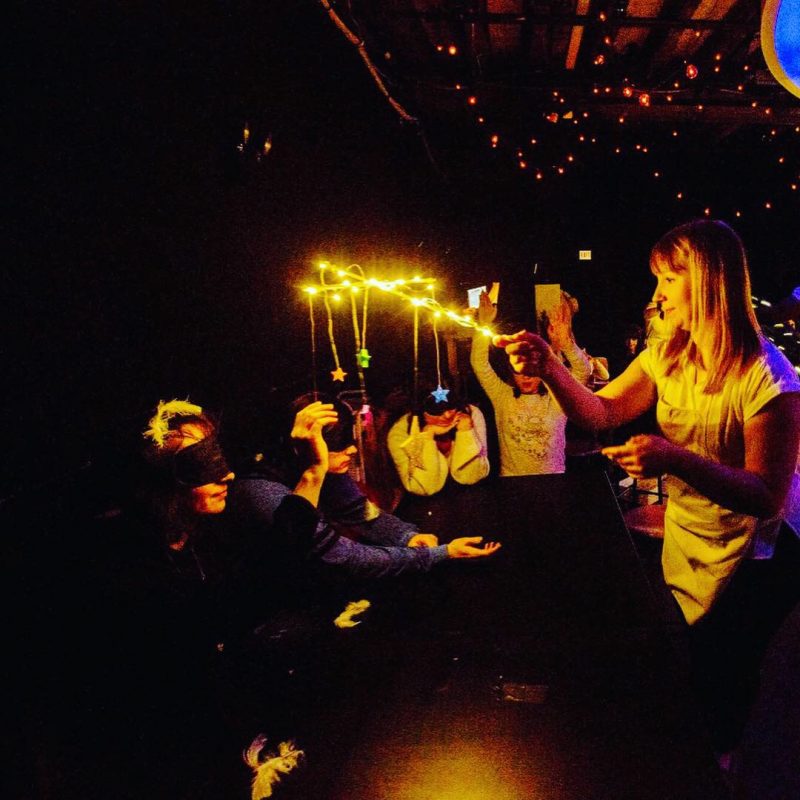 Keeping it “Theatre.” While the sensory work at the tables may feel like a theatrical experience in and of itself, the creative team felt it was important to provide this audience with a narrative-driven play rather than a purely multi-sensory exploration. “At one point, I thought it was going to be just at the table. But many people who are visually impaired love theater, why shouldn’t they get a play?,” explained Russell. That said, the way the play is staged is tailored to the needs and opportunities offered by this audience. Scenes are presented in the round, with the action constantly moving and actors performing in front of and behind audience. In this way, the audience can feel the movement of the show and the proximity of the performers, even if they are unable to see the action. The text is divided between the actors as characters in the narrative, a narrator, and the facilitators – providing a rich interplay of auditory storytelling for the audience.

Providing an opportunity for ALL audiences to experience the work. Early in the process, CCT made the decision that while the piece was designed with a specific audience in mind, it should be made for everyone to experience. Sighted audiences are welcome, and are invited to wear blindfolds for the duration of the show to activate their other senses. In this way, Jacqui and CCT hope that X Marks the Spot offers the chance for all audiences to participate in a totally new way of engaging in live performance. “People don’t want to passively experience anything anymore,” she shared as the production was about to begin rehearsals. “I’m hoping this informs all the theatre that we make.”