Teaching Theatre in the Age of Trump

Graciela Reyna was making plans for her 8th grade production class. And then the election happened.

She knew she wanted to give her students an outlet as they figured out, for the first time, that the opinions of their families and the ideals they were taught to believe were not necessarily the same as those of their friends in this rural 700 student middle school outside of San Antonio, Texas.

“I told them, ‘I’m not here to tell you what to believe… you need to make your own choices and decisions, and it doesn’t mean they’re wrong,’” she says. This conversation led them to their production piece: “The Election,” by Don Zolidis.

Choosing this play about a high school student council election (that was penned, perhaps prophetically, in 2012) was a direct reaction to the events surrounding the 2016 election. Reyna used real-time events in her preparation for her production. When the students claimed that the depiction of the media in the play was “funny but outrageous,” she showed them a clip of now-former Trump Press Secretary Sean Spicer and asked them to compare their perception of his intention with the media fallout that ensued from his remarks. When she asked them about the parallels to their play, “they said, ‘It’s the exact same thing,’” she recalls.

“This is what theatre is for,” she says. “It’s supposed to challenge what is happening in the world. That is what art does.”

And while we all know that teaching does not happen in a bubble, shielded from the outside world and sociopolitical influences, never has this felt truer than in recent days, when political discourse has so engulfed the lives of all Americans. Although drama has always been a space for  self-expression, for many students and teachers, this outlet has been even more crucial as the country becomes more politically divided. In discussions with teachers around the country, they report that the run-up to the 2016 election and the consequences have left their drama departments even more focused on creating timely and politically-minded work.

“It’s a lens that I’m working through,” says Nina Meehan, artistic director of Bay Area Children’s Theatre, describing the way Trump’s election has influenced her work. This description of a shifting perspective on everything from season selection to material choice to classroom language is repeated from drama educators across the country.

“This is Where Their Heads are At”

Elisabeth Westphal could see, even in August, that 2016-2017 was shaping up to look a bit different from past school years. With the political news revolving around race-based comments from a leading candidate, she knew that her school in Evanston, IL would need to respond to the environment in which many of her immigrant students found themselves. She planned, with her principal, a school-wide process drama about the civil rights movement to take place in February, replacing more traditional commemorations of Black History Month. Her focus: the Student Nonviolent Coordinating Committee, because the organizers were only slightly older than her middle-school students at this Title 1 school a few miles from Chicago.

“I wanted to make a point that you can make a difference,” said Westphal.

Additionally, she also partnered with two colleagues to create a workshop on equity and choosing diverse materials to be presented at a district-wide professional development workshop (that happened to take place on election day). Although she noted a trend towards addressing diversity in the district, the group “may not have felt like it was something [arts teachers] needed to address, had it not been for the fact that [we] three people were all feeling very tense about the election,” she says. “When they call for teachers to … [present a workshop], you think ‘should I, or shouldn’t I?’ but this time it was ‘Yeah, we should do something, because we have something to say.’”

Westphal’s devising class took a Newberry Honor book focusing on socioeconomic diversity, Last Stop On Market Street, and turned it into a touring production for the district elementary schools. “We used that book to address the idea of people with disability, and hunger and poverty,” Westphal explains, adding that she doesn’t think the students would have been as engaged in the story were it not for the sociopolitical atmosphere surrounding the show’s creation. “I gave the kids an option of doing whatever they wanted,” she adds. “But they were the ones who glommed onto ‘we want to talk about what’s going on now.’”

Westphal is not alone in her experience watching the political climate influence the way resources are used in her arts classes.

The Holocaust play, I Never Saw Another Butterfly, has been part of Maren Oom Galarpe’s middle school curriculum for a dozen years. But this year, the theatre teacher in Aliso Viejo, CA, saw students drawing parallels between the standard-bearer and current events. While students used to approach the topic of religious persecution as something that occurred in the past, “They are bringing it more to the NOW,” she explains, adding that one of her students whose family fled from Aleppo, Syria, had opened the door to many of these conversations.

Even Shakespeare study gets a makeover in the age of Trump. Elena Velasco, theatre teacher at Burgundy Farms Day School in Alexandria, VA, said she didn’t even have to bring up the parallels between the ambitions of current politicians and MacBeth. “I don’t have to drill this play,” she says. “This is where their heads are at.”

Curriculum isn’t the only thing that changes in the air of political strife. Chicago teaching artist Alice Stanley says she’s more attuned to student comments and stops class with more frequency in order to address them. Instead of barrelling through an improv lesson, Stanley says now she feels more of an urgency to take the time to address gender stereotypes, for example. After the election, “I’m more cognizant that young women aren’t as far along as I thought they were, and I want to push them further,” she says.

“I’m more cognizant that young women aren’t as far along as I thought they were, and I want to push them further” - Alice Stanley

But teachers are also wary of veering too far away from the art to address the political climate. HowlRound editor P. Carl noticed the syllabus for his Emerson College class, “Burning Down The House: Disruptive Narratives in Theatre and Life,” was coincidentally addressing various social issues (Muslim prejudice, transgender rights) on the exact day breaking news concerning those topics would hit the press. But he is careful not to let the students’ stress about these issues – and his own – steer the class in a divergent direction. Carl says he hopes the news of the day can be at the periphery of the conversation of the text and story the playwright is telling, as the class is designed to address key cultural issues. The question remains, “How can we help each other sort through this time intellectually?” he asks. “I don’t want it to be a therapy class. I want it to be rigorous and teach things I’ve committed to teaching and simultaneously conscientious.”

Plays That Speak to the “Here and Now”

For producers whose productions are limited in number, each show becomes an opportunity to address timely, relevant questions. Bloomsburg University in Pennsylvania usually devotes one of its two production slots to plays that speak to the “here and now,” says professor David Miller. But for next season, the selection committee has insisted both plays meet that need. Conversations about the election have led more to those about the country’s “great divide,” says Miller, “especially because it led us to a great discussion about plays that ask questions versus plays that give you answers.”

Zaneta Chambers and Clare Beeny create a play each year with their second-graders at Sidwell Friends School in Washington, DC. This year, after Trump’s first announcement of the ban on refugees, they turned attention in their social justice focused curriculum towards the refugee crisis. They used the book, My Name Is Sangoel, by Karen Williams and Khadra Mohammed, and devised their play around it. While few families suggested they were pushing a political agenda and claimed they were telling only one side of the story, their administration supported their work, and they didn’t back down. “Our focus was on inclusivity, and if there are people who are fleeing because they are in threat of violence, do we help or do we not?” says Chambers. “When you boil it down, it’s ‘are we going to include or exclude people?’ and it becomes kind of hard to decide we’re going to exclude people.”

Even plays that don’t seem overtly political take on a new meaning. Both iTheatrics’ Marty Johnson and Meehan point to Seussical, the popular musical whose message is “a person’s a person no matter how small.”

“Even in a show that seems commercial, each day the kids are hearing ‘a person’s a person no matter how small,’ and that’s doing great things.” - Marty Johnson

“Even in a show that seems commercial, each day the kids are hearing ‘a person’s a person no matter how small,’ and that’s doing great things,” Johnson says. “I get a little teary just thinking about it, but it’s true.” Meehan echoes the sentiment, after having produced the show during election season. “What was happening is the kids would bring it up, and the parents were using it as a mantra of helping to explain what is important now, and what we can do as individuals to treat each other well,” Meehan says. “We weren’t proactively changing our work – the kids were bringing it to the show.” 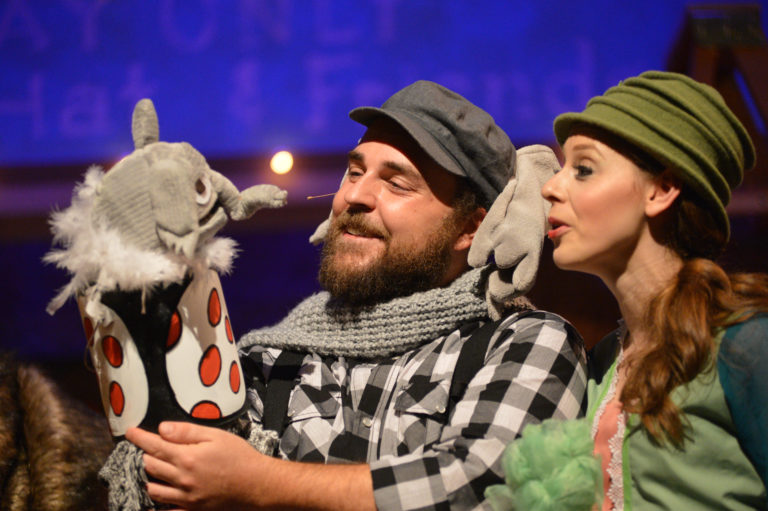 Elementary drama teacher Martin Rodriguez’s students carried the current political climate into the classroom during a process drama about an “evil king” who demands that all people who are different should be hated. His south central Los Angeles students recalled Donald Trump’s highly publicized words and actions when discussing their encounter with the king. “I had done this process drama for an anti-bullying focus when I was student teaching, but I hadn’t done it since then,” he explained. “I thought it would go back to racial equality, but it went towards a place of ‘we have to stand up for ourselves and we believe this is right, and people who are different should like each other and accept each other’s’ differences.’”

While drama teachers point to change following the Trump election, they are also quick to point out that the political change has coincided with the mass appeal of the hit Broadway musical, Hamilton. The Lin-Manuel Miranda musical’s rise to popularity cannot be divorced from its political climate, and the two together have created a new climate for teachers. “What’s so exciting is to see young people seeing they can have a voice – like Alexander Hamilton did,” Galarpe says. She’s worked on a theme all year inspired by a line from the smash hit: “Who lives, who dies, who tells your story? We look at the origins of theatre or songs and how it has changed over time, and who has a voice, and whose voice lives on after others are gone.”

Giving students voice to share may be the single most often repeated refrain of this group, who universally say their teaching has changed in the era of Trump. And those voices, too, have changed. Keri Lesnik’s playwriting students at Kent Place, an all-girls private school in Summit, NJ, began writing scenes about stereotyping before the inauguration. But the Monday after that whirlwind weekend, in which Lesnik joined millions of protest marchers, their writing took a very different turn.

“Their scenes, with very few exception,” she says, “ended up with a revolt.”