Many Theatre for Young Audiences practitioners complain: “We have solid audiences until 5th grade or so, then we lose them.” Teachers face multiple challenges bringing their students to our theatres, including logistics, justifying field trips, and funding. For many schools “art for art’s sake” no longer makes the cut. How might this change if we invited students to engage in dialogue with the play itself, as part of the production?

How can theatres help teachers make the case that attending live performances is vital for students?

The Coterie in Kansas City, Missouri made an exciting discovery when producing Secret Soldiers: Heroines in Disguise aimed at 5th grade and older. While this audience is typically challenging to reach, the school shows sold out and the number of classes on the waiting list could have sold the show for two or three more weeks. This production, about women who fought as men in the Civil War, was part of a continuing effort to grow upper school and weekend audiences. What makes the play a unique draw for teachers and students is its theatre-in-education [TIE] format, which invites the audience to participate in the framework of the narrative. The play, based on primary source documents, prompts students to actively explore gender issues through a historical lens.

At the beginning of the play everyone in the theatre is sworn in as new doctors at Marine U.S.A. General Hospital. By the end the audience must decide if a patient under their care should be listed in the hospital ledger under her given name: Sarah Wakeman, or her male alias: Private Lyons Wakeman. A vote one way helps prove that women served in battle. A vote for the other side averts family shame and offers the possibility of a soldier’s pension.

Teachers embraced both the play’s “built in” reflection, and its format—students immerse themselves in the period the play. The inclusion of primary source documents, related to the “Common Core,” deepens students’ connection to history far beyond a study guide. Teachers reported that bus rides home were exciting because the dialogue continued. Even the weekend public gets in on the action. A twenty-two-year-old artistic director attended a final Sunday matinee and wrote, “I loved the interaction. The audience was on the edge of their seats trying to decide how it should go, because everyone was so conflicted.”

Emilie Karas (as Sarah Wakeman a.k.a. Private Lyon Wakeman) in Secret Soldiers: Heroines in Disguise, written by Wendy Lement, co-directed by Jeff Church & Bree Elrod, and co-produced by The Coterie and UMKC Theatre in community partnership with Girls on the Run. On stage at The Coterie January 22-February 10, 2019. Photo by J. Robert Schraeder and courtesy of The Coterie Theatre.

What is TIE and why isn’t it being used more? Is it participation theatre?

TIE is distinct from “participation theatre,” popular in the 1960s and ‘70s, in which young people took part in some way (e.g., invited onstage to become a forest or led on a journey by actors). According to Tony Jackson, co-editor of Learning Through Theatre:

TIE emerged from the new thinking and atmosphere of experiment that characterized British Theatre of the mid-1960s, and from developments in educational drama in schools… expanding the role of theatre companies who sought to develop proactive relationships with the broader community… The participation format… [became] the identifying feature of TIE, clearly identifying it from more conventional children’s theatre.

While TIE has morphed into a variety of forms, meaningful participation remains an essential component. Goals, structures, modes of interaction and artistic values vary greatly. Some companies attempt to lead audiences to the “right” answer: “drinking is bad.” Such aims are antithetical to TIE, which is meant to evoke a variety of responses. And for companies focused on community engagement or whose work verges on therapy, aesthetics may not be a major consideration. As the field has expanded, TIE practitioners hold differing views on the importance of artistic integrity.

TIE is best blended with TYA when it is artistically satisfying, open-ended, and examines gray areas, immersing audiences into the heart of vital human conflicts. Once invested in the outcome, the stakes for audience members are high. Students’ questions and opinions on the dilemma at hand take on an urgency, and they may change their minds several times while contemplating the best path forward.

Pursuing a TIE/TYA hybrid is Boston’s Theatre Espresso, co-founded in 1992 by four theatre artists from a TYA background. They learned about drama-in-education [DIE] and TIE at Emerson College, and had experimented with Cecily O’Neill’s DIE structures and Dorothy Heathcote’s “Mantel of the Expert” methods (i.e., students become “specialists” confronted with increasing complex dilemmas) in summer arts programs. Through trial and error, the founders created and toured TIE plays to schools. In 1993 two of the founders took a devising TIE course with Chis Vine and Lynne Clarke (formerly of Greenwich Young People’s Theatre), which significantly informed the company’s future work. They were also inspired by the artistic quality and innovative approaches to audience participation of Graffiti Theatre in Ireland.

Is it time to reconsider the potential of the TIE model in a way that’s beneficial to both schools and theaters that emphasizes artistic integrity?

Until 2016, Theatre Espresso was the only company to perform their plays. That changed when Coterie produced And Justice for Some: The Freedom Trial of Anthony Burns [1858]. Heading to Kansas City the playwrights were nervous about how their TIE play would fare in at TYA theatre. Burns was successful back in Boston with professional actors who had researched the period and refined audience interaction in schools and other settings. While witnessing the play at the Coterie—with a fully realized set, sound, and lighting design—it became clear to the playwrights that students were pulled into the world of the play on a level that transcended the touring version. 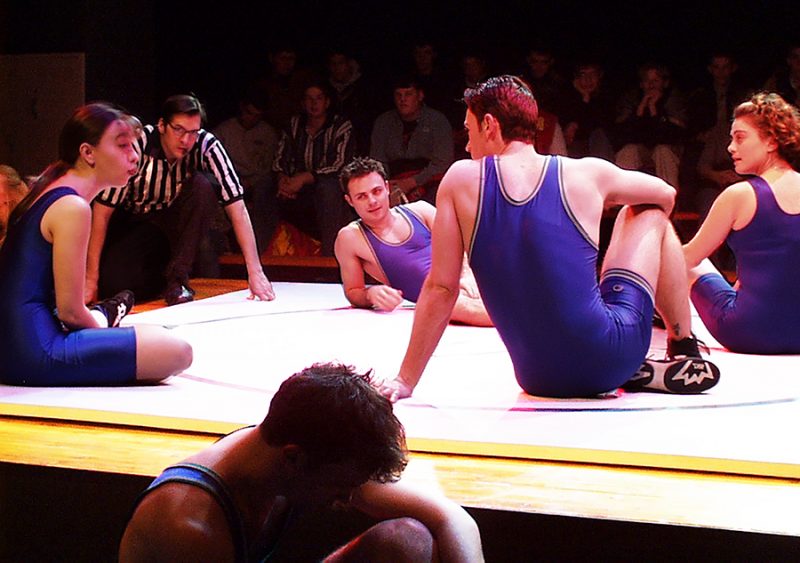 Left to right: Alicia Jenkins-Ewing (as Nicole), Anthony Guest (as Referee), Joshua F. Decker (as Luke, foreground), Beth Guest (as Melanie), Judson Morgan (as Jolt), Matt Ramsey (as Willy), and Amanda Rafuse (as Heather) in The Coterie’s world premiere production of The Wrestling Season, written by Laurie Brooks and directed by Jeff Church, January 2000. Photo courtesy of The Coterie Theatre.

In addition to Secret Soldiers and Anthony Burns, The Coterie in recent years has produced Theatre Espresso’s Nine Who Dared: Crisis in Little Rock and other TIE plays. There was a brief time nearly 20 years ago when TYA theatres recognized Laurie Brooks’ innovative The Wrestling Season (commissioned by The Coterie) as a form of TIE to attract teen audiences. This play uses Boal techniques and includes a forum at the end. While that play was produced a great deal, there are some inherent challenges to the form and format. As Linda Hartzell noted, “When the actors have to improvise in the play, their speech isn’t as artful as the scripted language the playwright creates.”

An alternative view is: If you want to excite middle school students, let them hot seat (question) actors in character. That’s theatre! In the case of Secret Soldiers, the audience takes seriously their role as medical officers and forcefully debate whether Wakeman’s privacy should be protected, or if her service should be made public so that it isn’t erased from history? Young people embrace probing the broader implications of either action before the question is put to a vote.

Improvising with the audience forces TIE actors to listen and be “in the moment.” Theatre Espresso’s performers often comment that their work with the company helped improve their overall acting. Conducting in-depth research and rehearsing the interaction enables them to respond to questions with improvised speech that matches the script. Connecting authentically with students is vital to TIE. Actors must ensure that the stakes are extremely high so that students are compelled to participate. 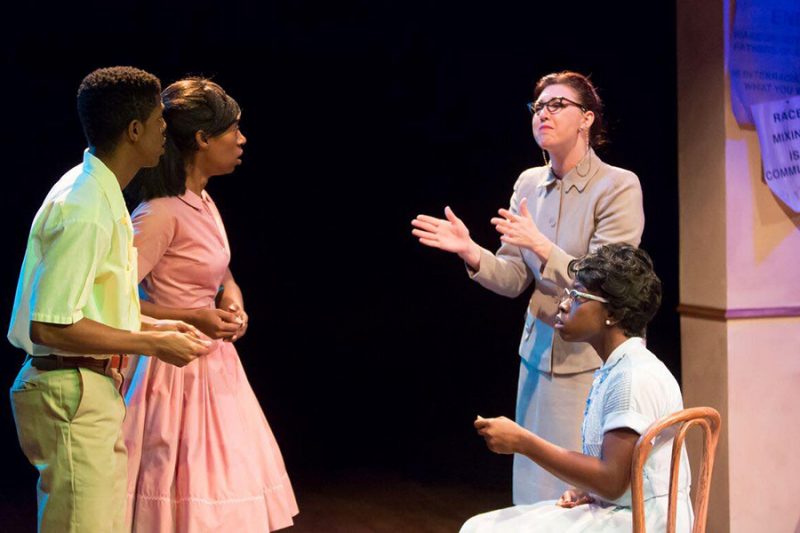 How do TIE-TYA collaborations work?

The TIE-TYA collaboration is most worthwhile when playwrights and directors share strategies for facilitation and answering questions that foster a variety of responses. To that end phone conversations between the TIE playwright and TYA director before and during rehearsals are crucial. When possible, having the playwright attend previews is extremely helpful. The Coterie invited authors of Theatre Espresso plays to share their observations about the interaction, and to offer suggestions for effective ways to foster meaningful and open-ended discourse with the audience. Actors asked the playwrights for advice on how to deal with difficult situations that could arise. As their plays are based on primary sources, the playwrights offered historical details to enrich actors’ responses.

I learned how empowered the audience is by the piece. They are not merely witnesses, but active participants, almost another character/scene partner.

The TIE-TYA collaboration IS an exciting one. While Theatre Espresso doesn’t have the resources of the Coterie, the playwrights returned to Boston with ideas to heighten moments in their plays. Most importantly, seeing their plays at the Coterie helped them realize the potential of their work in the hands of a prominent TYA theatre willing to embrace the challenges of producing TIE. Nashville Children’s Theatre’s Executive Artistic Director Ernie Nolan visited The Coterie (in preparation for a production of Secret Soldiers in 2020), and shared his reaction:

I learned how empowered the audience is by the piece. They are not merely witnesses, but active participants, almost another character/scene partner. In a way, it felt like more of an immersive piece than a traditional ‘play’… The total involvement and complete submersion of the audience into that world was enlightening and inspiring for our future production.

Since 2016, when the Coterie produced Anthony Burns, and the Great Theatre in Minnesota produced Nine Who Dared, the migration of Theatre Espresso’s plays from touring to resident productions has begun. This development may seem like a radical departure for TYA. But in truth is reflects the initial impulses of Britain’s professional theatres in the 1960s that sought to experiment with form and connect with the community. By breaking down artificial barriers, and with a shared goal of engaging upper school students in substantive topics, TIE and TYA companies can develop mutually beneficial collaborations and prepare actors to engage in nuanced dialogue with student audiences while offering young people a way to be part of the action of the play itself.