TYA Today Writer Shavonne Coleman looks at three productions that opened last year across the TYA landscape that "demanded a space and time to unearth that which was once hidden" by telling the untold stories of the African American women whose instrumental work as "human computers" at NASA in the '60s led to groundbreaking achievement.

Last year, the New York Times published an article entitled “Black Kids Don’t Want to Read about Harriet Tubman All the Time” by Denene Millner.  This article spoke to the fact that black people want, and deserve, stories about other black people that aren’t all about slaves.

Yes, these stories portray a history of “resilience” at a level that the experts who’ve made it a buzz word will never understand. And yes, learning and hearing about slavery is a blarring example of how far we’ve come to a certain extent. But, this article is right: Black kids want and need you all to fill in the blanks between now and then. All kids need you to fill in the blanks between then and now. In order for us to start building a culture of care, we have to truly get to know the folx who make up our communities and how these things impact our world. As a field we are elevating stories that are richly woven into our history but were unjustly hidden. This past season, three theatres demanded a space and time to unearth that which was once hidden. 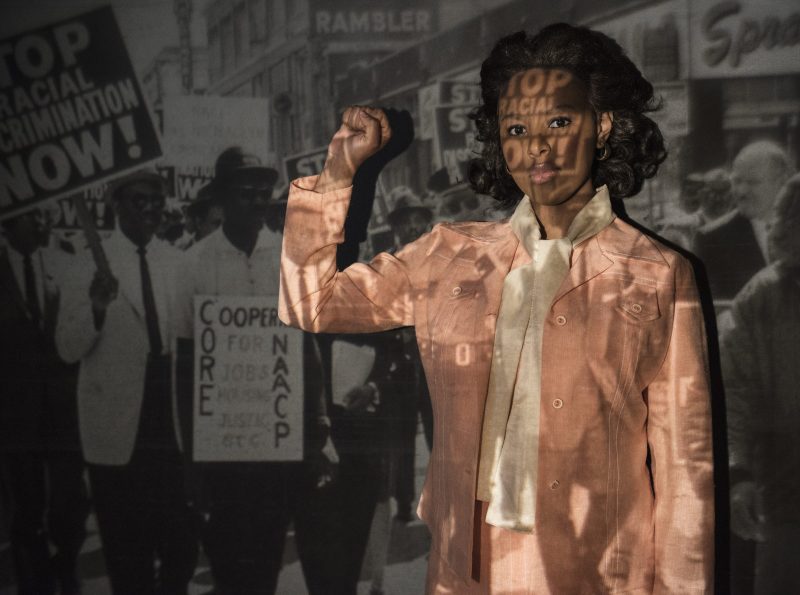 Commanding Space: The Rise of Annie Easley and the Centaur Rocket, a touring production from Syracuse Stage, written by Stephanie Leary and directed by Joann Yarrow, is a great example of how we in theatre can demand a place on our stages for stories that need to be told.

“Your work, whatever it is, is that extension of you and what you believe in and what you’re passionate about,” said Joann Yarrow as she spoke about the process of developing this show. This show is based on the true story of Annie Easley, one of the African American women that worked at NASA in the ’60s as “human computers.” Yarrow recalls having so much source material that they had to make decisions on what information to value in this production, selecting which details would benefit this particular story. Stephanie Leary, a New York-based playwright, recalls sitting down with Yarrow after the first draft and being asked “What is it about?,” and her innate response was, “Well, what do you want it to be about?” Many artists have experienced this feeling. Many of us have had this involuntary response, especially if you and the story that you are working to tell isn’t one that fits into the world of the majority in some way, shape, or form. “I felt, I don’t know, unsure. I don’t know if I was hesitant to go into what it was about for me. Leary admittedly stated that the first draft, created from an interview with Annie Easley found in the NASA library as well as speaking with friends and family of Easley, turned out more like a book report and less like the show that it eventually turned out to be. “Kyle [Bass, the Associate Artistic Director of Syracuse Stage] told me after he read the first draft, he said he wanted it less about Annie and more about me, and he told me to work through any of my stuff through this play⁠—the stuff I was going through.”

Eventually, Leary came to what this play was about: the Mother/Daughter relationship, and her journey coming to terms with racism while exploring anti-racism in the last few years.“That’s what the play was about for me, the mother and daughter relationship and how to survive–and I’m sure it was much more difficult for her back then, to thrive in a community or environment that doesn’t really want you.” After a while, Leary expressed the feeling of having reached a type of “cosmic” experience while working with Yarrow. As the work went on the comfort grew, and from there they reached, as she said, “sympatico.” The dynamic allowed her to put herself into it. “It was just a weird process, I thought that we (Leary and Easley) had a lot in common especially after hearing her voice. In the play I had her do a lot of things that I’ve had to do, in one part I wrote that she was encapsulated by whiteness.” As Leary explained this, I reflected on how one navigates this everyday; in what ways that influences who you are versus who you show up as; and how it transforms our work.

Commanding Space: The Rise of Annie Easley and the Centaur Rocket in rehearsal.

This process of  putting herself into the work not only impacted the final draft but created something that was transformative. Speaking briefly with MiKayla Hawkinson, the Stage Manager for this production, really solidified the spirit of this piece for me: “This piece has a lot of heart. It brought forth such joy for me. Easley was able to push forward and succeed with such grace. ‘If I can’t work with you, I’ll work around you!’ Easley said. These words always rang true to me.” For those involved, including the multiple audiences it was performed for, this show was not only education in history but food for the soul.  You can see Commanding Space: The Rise of Annie Easley and the Centaur Rocket during the IPAY showcase January 21-25, 2020 in Philadelphia, PA. 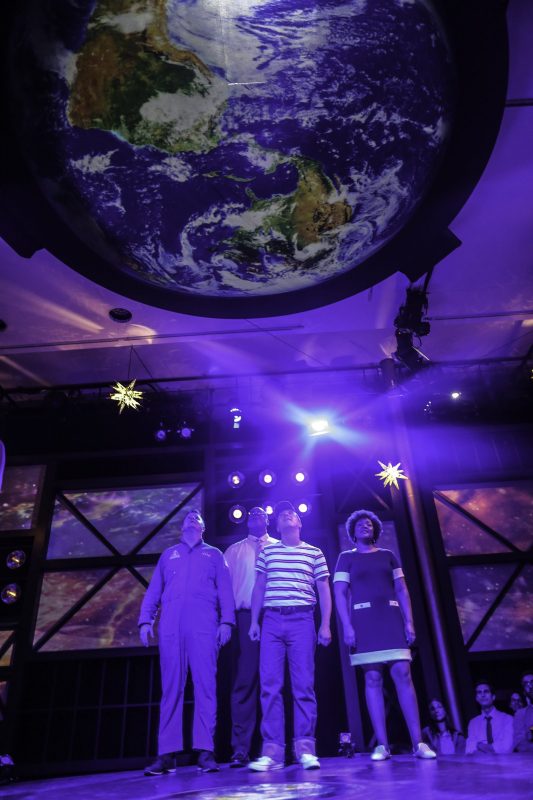 This past summer the Kennedy Center, in commemorating the 50th anniversary of the moon landing, premiered Earthrise (written by Lauren Gunderson with original music by Kait Kerrigan and Brian Lowdermilk, directed by Dawn Monique Williams).

Harry Poster, Producer, Theater for Young Audiences at the Kennedy Center, described the show as an “immersive experience.” Lauren Gunderson was commissioned to write this show after sending a treatment to the Kennedy Center, wanting to write a show that celebrated the collective experience of watching the first man land on the moon. This show allows us to experience the moon landing through an intergenerational, multiracial experience in which the audience is put in the control room of this historical experience 50 years later. “The theme of the Kennedy Center’s programmatic season was ‘The human journey’ and to really explore stories that promote a deeper understanding of the migration of people, resiliency of humankind…and what human beings are capable of, overcoming conflict, and challenging ourselves to go farther than we’ve ever gone before,”  Poster says. In these pieces that aim to recreate the human experience and are therefore innately inclusive, we connect. As Millner pointed out in the New York Times article, “Color is of no consequence to the stories, but it still matters to black children looking for themselves in the pages”—or the stages in our case. 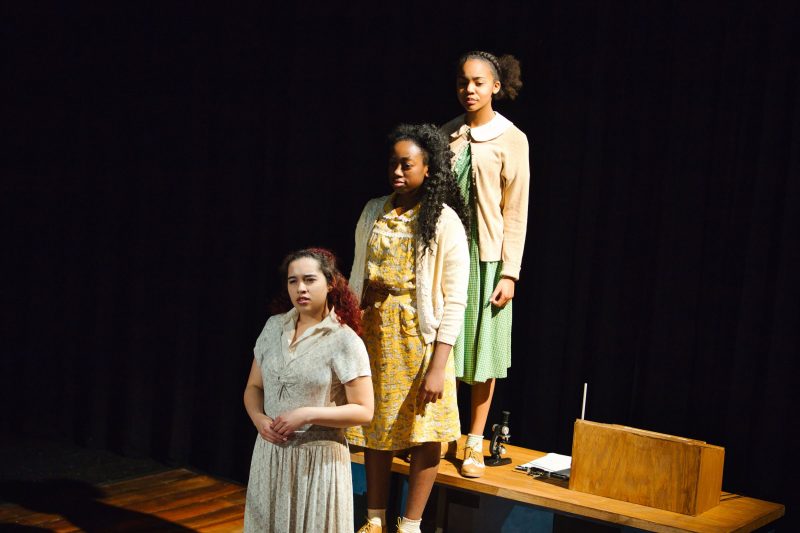 At Stages Theatre Company in Hopkins, Minnesota, the soul of a story went from page to stage in Hidden Heroes written by Shá Cage & directed by Signe V. Harriday.

Another piece exploring the group of black women mathematicians who shaped NASA behind the scenes, this play was a new adaptation which brought to life the book Hidden Human Computers: The Black Women of NASA by Sue Bradford Edwards and Duchess Harris. Harriday was involved in the development of this piece, coming in a little over a year before the production went up. As she explained a bit about the process, it became apparent to me how important it was for them to get the right people in the right roles during this project. Sandy Borren-Barrett, Artistic Director, made a request to adapt the book into a play. Once the publisher agreed, Sandy sought out Harriday for this project, knowing her from years of work in the field. The next step was finding a playwright, and Harriday reached out to Cage, someone she’d known for a long time, and who she had worked with in the past. “From the inception, Sandy knew it wasn’t her story to tell,” Harriday explained. Some people say it’s not the intention, it’s the impact, but often it starts with the intention which ultimately shapes impact. You can stumble upon an impact that is perceived as positive, but really growth starts from the roots, and therefore the intention to get a project like this into the right hands will ultimately shape the impact to the community. “I think that’s in part what also made saying yes to the project possible, because the institution aimed to be of support and then is trying to get out of the way. Also, it’s centering black women, it’s centering young black girls, and then I was given the opportunity to say who I wanted to work with and I was able to work with Sha’…that was icing and ice cream on the cake.” Speaking to Harriday brought to the forefront of my consciousness something that I’ve heard multiple times in the last few months in conversations, presentations, and in speeches: “Nothing about us, without us.” 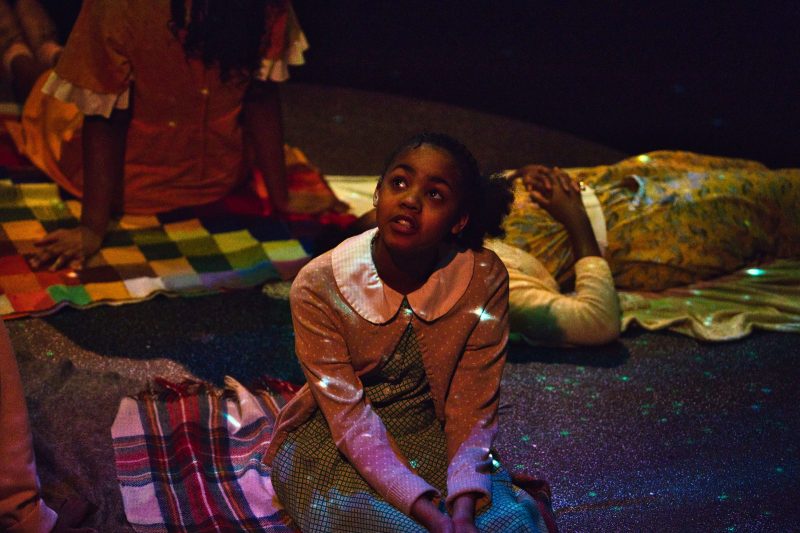 These pieces are a testimony to where we are currently, but also evidence that we are at a crossroads, a crossroads where one road continues forward while the other loops back. Anyone can demand space for folx with identities or abilities different than their own, but it takes strength, intention, and persistence to then advocate for that space to be commanded by someone from that community. When we are one with the community which is underrepresented, the push requires a balance of demanding and commanding. This is quite delicate and sometimes draining. But, keep on to your capacity, and be intentional, as you are needed to fill the void for others.  Regardless of who you are, intentionality will continue the momentum forward, toward the end of “first black,” “only woman to,” “first in a wheelchair,”the first Latinx,” “only person on the autism spectrum to ever,” or “first openly LGBTQ person to…” and the list goes on. Until we’ve made that level of impact, it’s still the time to demand a place and space.